Wonder Woman is a comic strip published in newspapers from May 1944 to December 1945. Distributed by King Features Syndicate, the strip was written by Wonder Woman creator William Moulton Marston with art by regular comic book illustrator Harry G. Peter.

The first strip jumps right into the action with Wonder Woman saving a baby from a burning building. Although she'd been named by her mother in All Star Comics #8, and her exploits had become commonplace in Sensation Comics and the Wonder Woman comic book title, the first strip depicts the public as unfamiliar with her heroics, and a newspaper editor dubs her "Wonder Woman". Her origin was retold beginning in the May 15, 1944 strip as an exposé on the Amazons by Editor Brown for the Washington Clarion, discovered by a parchment gifted to him by Nurse Diana Prince. 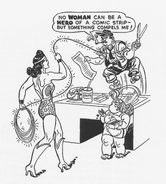 illustration for Marston article in The American Scholar, 1943
Add a photo to this gallery
Retrieved from "https://wonder-woman.fandom.com/wiki/Wonder_Woman_(newspaper_strip)?oldid=24661"
Community content is available under CC-BY-SA unless otherwise noted.