The series is written by Andy Mangels with art by Judit Tondora, and a number of variant covers by various contributing artists including Phil Jimenez and Alex Ross. 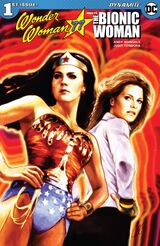 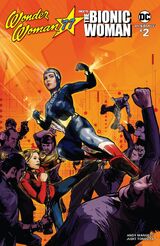 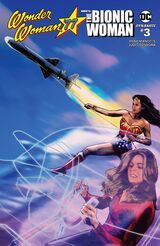 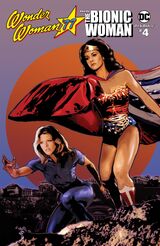 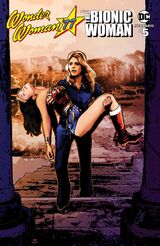 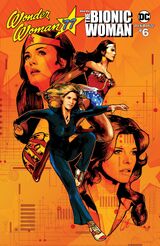 Press release as it appeared on Newsarama, September 1, 2016 3pm ET:

Government agents Jamie Sommers and Diana Prince team their respective powers against a threat to national security in this series too big for the small screen! In this action-packed miniseries, the two television titans team up to fight a rogue cabal bent on wreaking havoc and stealing deadly weapons. Can CASTRA be stopped before their real targets are revealed and lives are lost? With super powers, bionic enhancements, surprise villains, and an invisible plane, just about anything is possible!

"The Bionic Woman and Wonder Woman television series were some of the most exciting of their time, and these two characters perfectly complement one another," says Dynamite CEO and Publisher, Nick Barrucci. "To finally see them together is a historic event for an entire generation of fans. This is going to be one of the most exciting crossovers we've done yet!"

"DC is thrilled to partner with Dynamite once again on a crossover of classic pop culture characters," says Hank Kanalz, SVP, Editorial Strategy and Administration for DC Entertainment. "I can't wait for fans to see what happens when these two iconic heroines meet in December."

"For forty years, fans have been wondering what would happen if their favorite television heroines got to meet," says bestselling author Andy Mangels, acknowledged as one the world's top experts on Wonder Woman. "I'm thrilled to get to mix these two feminist icons into a massive story that respects not only the characters themselves, but also the magic that Lynda Carter and Lyndsay Wagner brought to their history-changing roles. The 10-year-old Andy would never have believed that instead of running around in his backyard making 'wonder leaps' and 'bionic runs', he'd actually get the opportunity to craft stories that mix the best of these two worlds into one!"

Andy Mangels is the USA Today bestselling author and co-author of over twenty fiction and nonfiction books - including Star Trek, Roswell, Iron Man, and Star Wars tomes - and is an award-winning comic book anthology editor. As a pop culture historian, he has also contributed to international magazines and newspapers, and has scripted, directed, and produced over forty DVD documentaries and Special Features projects. In 2012, he was awarded the prestigious Inkpot Award for Achievement in the Comic Arts at Comic-Con International.