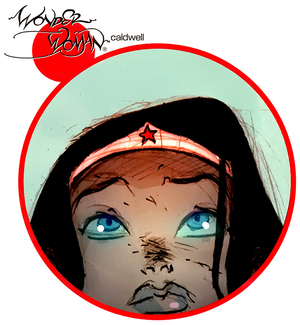 Wednesday Comics is a comic strip anthology published by DC Comics beginning on July 8, 2009. Originally intended to run weekly for a year in 52 installments, the project was ultimately downsized to 12 issues.[1] Each release included a serialized story for 15 different characters, with a Wonder Woman feature written and illustrated by Ben Caldwell. The series was printed in a 14x20-inch broadsheet format meant to simulate Sunday newspaper comics sections.

“CBR: First off, how did you come to be involved with “Wednesday Comics?” Did you have prior dealings with series editor Mark Chiarello?

BEN CALDWELL: Mark’s known me and my work since I did the Wonder Woman children’s books in 2004, and every so often he’d threaten to hire me for one thing or another. I met up with him last summer and he mentioned “Wednesday Comics” — back then I think it was “Wednesday Funnies” — and they were thinking about doing it as a longer series.

Now, first off, when Mark Chiarello offers you anything, you don’t ask questions. You just nod your head, “Yes,” and hope he doesn’t realize what a mistake he is making. And of course, the idea itself is a dream for any comic artist – I’d been itching to do something immense ever since I first read Paul Pope’s “THB Circus.” And the fact that it was such a violent reaction to my usual format – digest-size, 100-page graphic novels – appealed to my contrarian side.

What about the character of Wonder Woman? Was it your idea to do a strip on everyone’s favorite Amazon Princess?

Mark told me to tackle whichever character I wanted. Since his list of potential creators was sickeningly storied, I offered to take whoever no one else wanted. He looked at me like I was an idiot, and it just so happens that I am, and then repeated his offer. I happen to have several stories on hand for various characters, we talked a few of them over, including a sort of “Invasion from Mars” Superman story and a wacky high-school comedy for another character. But the whole time, Mark was flipping through my ubiquitous folder of sketches and I realized half of them were of Wonder Woman. I had a blast on the children’s books, but they were very straightforward and I had always had an itch to explore the weirder and more Marstonian side of her world. I was always coming back to Wonder Woman and the Amazons, so by the time lunch was over I knew I had to do Wonder Woman. And by the time I pulled into my driveway, I had three plots worked out in my head, including most of what made it into my final story.

What do you love about Wonder Woman as a character? And what about her alter ego Diana Prince? Were you a fan of the Lynda Carter TV show growing up as a kid in New York?

Of course. I was always aware of Wonder Woman as a character, from comics and TV and “Super Friends.” I had some post-“Crisis” Wonder Woman comics, although at the time I was oblivious to “Crisis” and everything related to it. I would just buy whatever books had cool covers or interesting stuff going on in that particular issue. In this case, I picked up these comics that had Greek myths, a plus, cursed islands, another plus, and angry, heavily armed women, a big plus and a bonus.

I first really researched her artistic heritage when DC hired me to redesign the DCU for an experimental project. But when I began researching the children’s books, I really fell in love with Wonder Woman and her world. Although I had to play the illustrations for that book fairly conventionally, I always felt that there were a lot of things that could be done with Wonder Woman that no one had really tried out. At least part of my Wonder Woman was an attempt to hack out some new areas for creators to explore.

And although I didn’t have the room to work it into my story, I love the Wonder Woman/Diana Prince identity – even more than Superman/Clark Kent. Diana is a fish out of water in our modern world, and “Diana” gives her a chance to explore our world in interesting, touching, and hilarious ways, especially if Etta [Candy] is “helping” her adjust.

Were you a fan of the newspaper funny pages? And if so, what was your favorite comic strip?

“Calvin and Hobbes,” definitely. Not least because they lived in nearby Chagrin Falls, Ohio. The old-school Sunday pages were long gone by then, but “Calvin and Hobbes” was not only mercilessly funny, but created an entire world of its own.

You’re both writing and drawing the Wonder Woman strip for “Wednesday Comics.” Would you have done it any other way, meaning would you have been open to collaborating with someone?

I’m open to anything. As Mark knew, I’ve worked with writers, I’ve been writer/artist, I’ve edited other people’s writing and art – everything. That being said, Mark didn’t ask me if I wanted to collaborate, and I’m willing to bet that he was as curious to see what sort of story I’d tell as much as what sort of art I’d create. I also have to mention that I’ve done some very atypical work that Mark likes. I wonder if he wasn’t actually expecting me to do something even crazier for Wonder Woman.

Can you tell us how you landed on the fantastical story you’re telling in “Wednesday Comics?” It’s certainly not a typical Wonder Woman smash-’em-up tale.

I would argue that this is a “typical Wonder Woman smash-’em-up tale.” After all, she is the heavily armed and reasonably attractive scion of an immortal race of warriors from the mythical dawn of time. Running around the world and dealing with ancient curses and fantastic monsters makes sense – having her struggle against a diabolical credit-fraud ring, not the same.

Reading the CBR forums, there seem to be two camps emerging. One that absolutely loves (and I mean loves) what you’re doing and others who feel you may be trying to jam too much into every page. Any thoughts on that, or as a creative type does it come with the turf?

Well, that is certainly a tactful way to put it. I’ll just say that there were three things I set out to do:

2) Refuse to be afraid of trying anything

3) Filling everyone else with delight and/or dread every Wednesday. Preferably, both at the same time.

Why did you choose to frame your story in a dream or dream-like state? Does it allow the tale to become even more fantastical?

There were four reasons for the dream venue:

1) I was a little surprised at the complaints about dreams being a ‘formula’ as opposed to what, in comics, exactly? Or having no meaning or importance. Fantasy – and my story is certainly fantasy – is inherently dream-like. If it isn’t, the creator is aesthetically retarded, and should probably be restrained. As Campbell says, “Myths are collective dreams, and dreams are personalized myth.”

2) While I wasn’t specifically trying to echo “Little Nemo,” it was an obvious framing device for one-page installments. Moreover, I like to create patterns and then break them down. Dream framing is an example of that.

3) Being an essentially practical person, I wanted a simple, almost self-explanatory way for Wonder Woman to quickly travel around the world, without flying business class on Alitalia or whatever.

How did you go about assembling such an eclectic supporting cast, which includes the likes of Golden Age Cheetah Priscilla Rich, Etta Candy, the Oracles and the Supreme Buddha Shakyamuni?

A lot of people think I was trying to reinvent the wheel, but in fact I was just trying to boil things down. Doctor Poison as a soulless Japanese totalitarian, for example, was a no brainer. She and cheetah are two of Wonder Woman’s most iconic foes – the other two being Ares and Doctor Psycho – and for the plot I had, the world-destroying Poison and archaeologically inclined Cheetah were an obvious fit. As for Etta, in addition to being one of my favorite comics characters, as the story developed she became indispensable. In fact, I actually expanded her role from its original conception. You’ll also notice that all of the major players are female.

The Graeae, who will return, were the greatest oracles of the ancient world, so they seemed like another obvious solution for the role of “emcees” for the adventures. I had originally considered having them involved in every page, but there wasn’t space. In the end, they only show up on pages #1, #4, and #12.

By way of segue, a lot of people also seemed surprised/dismayed that so much of the mythical material in this story isn’t Greek. Their surprise is surprising, as there are two perfectly simple reasons for this:

2) More importantly, the whole point is that the “Seven Stars” were abandoned when the Amazons came to Paradise Island, and made their way into history and myth throughout the world. It would be silly for Wonder Woman to go to Japan and fight a centaur.

Each of the myths/sites was chosen for specific story reasons; in the case of the Shakyamuni clan of page #5, as you pointed out they were the clan of Gautmama Buddha, “The Enlightened One.” Page #5 is one of the most pivotal pages in the story for various reasons, especially as it contrasts to page #4. This is the scene where Wonder Woman takes her first major step forward by deciding to essentially fail – at least in terms of her quest – which would be incredibly difficult for a warrior bred in a warrior culture where success is achieved by defeating your enemies. This is where she stops being simply an Amazon and really starts to act like Wonder Woman. And so this is the first scene that ends with her waking up clear-headed and fully “aware” of her story. And this is why, incidentally, the Madonna is featured so heavily on page #9, when Wonder Woman is becoming a guardian of children. And why she gets the bracelets off of a statue of Kuan-yin, who was in many ways the Chinese Buddhist version of Athena, but also the guardian of children. Wow, I am so clever.

For more unbelievable fascinating junk like this, you can check out my annotations for the pages and more general notes on the amazons on my website, along with development art and other wonderful drippings.

Any chance we’ll see you contributing some more work for DC coming out of “Wednesday Comics?” I know Mark Chiarello is a big fan of what you’re doing.

I can officially say that I will be drawing more Wonder Woman beyond page #12 of “Wednesday Comics.” Wait. Can I say that? Too late.

What else are you working on these days?

For the past few years, I’ve been adapting classics, including “Dracula,” “The Odyssey” and “The Wizard of Oz.” Of course, recently a few hundred versions of “Oz” have come out, but I can guarantee that mine will have more panels per page than anyone else. Just kidding. Maybe.

I also do a lot of projects that no one ever hears of. Do you remember the “Lost Boys” cartoon? No? There you go. There is also another how-to book, this time on manga cartooning, in the works. And of course, the award-losing misadventures of “The Dare! Detectives” will be continuing in the next year. [Caldwell was nominated for the Russ Manning Most Promising Newcomer Award in 2005, but didn’t win.] For those poor benighted souls who are unfamiliar with the world’s most defective detectives, I’m looking at you, Uzbekistan, all panels are extra-large and uncrowded. And there are no dreams.”

Retrieved from "https://wonder-woman.fandom.com/wiki/Wednesday_Comics?oldid=25877"
Community content is available under CC-BY-SA unless otherwise noted.