Osira is a fictional character created by Alan Brennert and Martin Pasko. She is an alien who was worshipped as one of the Egyptian Gods and eventually encountered the Golden Age Wonder Woman during World War II.

Osira and her husband Hefnakhti arrived on Earth during the time of ancient Egypt. She used her powerful hypnotic powers to make the major civilizations of the time lay down their arms and live in peace. However, a wise priest realized that the price to be paid for this kind of peace -- free will -- was too high. He was able to trap Osira and Hefnakhti in a pyramid. However, in war-dominated 1942, two errant tanks from both sides of the conflict found themselves facing off against each other in Egypt, near the pyramid the two aliens had been trapped in centuries before. A blast from one tank aimed at the other blasted a hole in the pyramid instead, setting Osira free. Her husband, however, had died long ago, in a failed attempt to escape.

Osira proceeds to continue where she left off nearly three thousand years ago -- to bring the world to peace, willingly or unwillingly. As she begins to bring the major powers under her control, Wonder Woman soon becomes aware of her plans. Osira hypnotizes Steve Trevor and members of the Justice Society of America and turns them all against her, but in the end, Wonder Woman emerges triumphant, and Osira is apparently destroyed.

Thirty years after her pre-Crisis debut, Osira appeared twice briefly, joining other members of Diana's Rogues Gallery, but this time instead battling Donna Troy during Donna's tenure as Wonder Woman. 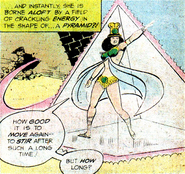