Olympus is a Kingdom at the top of a tall mountain.

Mount Olympus is the kingdom of Zeus and he rules with Hera at his side. 12 gods live on Mount Olympus, they are Zeus, Hera, Aphrodite, Hephaestus, Apollo, Artemis, Ares, Neptune, Hermes, Athena, Demeter and Dionysus. Pluto lived in his hellish kingdom called Hades. Unlike Hades, Mount Olympus had spring clean fresh water, jewels, gold, golden palaces and statues and golden apples. Mount Olympus was like a paradise, when Hercules completed the Twelve Labors he was immortality and full god status by Zeus, so then Hercules took his place as the God of strength but Hercules's love for the mortal world drove him away from his throne and he went to live in the mortal world. Zeus stripped him of his godly powers leaving him only with his strength but soon Zeus allowed Hercules to regain his godly powers even though he never came back to Mount Olympus. To the human eye Mount Olympus looks like a mountain filled with clouds but it is an illusion cast by Zeus so mortals cannot detect the presence of his utopia.

Olympus' look has changed, now being situated atop a skyscraper as opposed to a mountain. Apollo modified the Throne of Olympus to be a fiery eagle instead of stone to represent the fact that he had taken the throne. When the First Born killed Apollo, Olympus exploded but remained in ruin, becoming the First Born's dominion, covered in flesh. 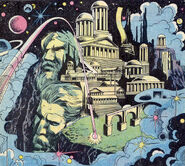 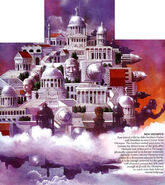