Nubia is an Amazon whose origins have changed through various incarnations of the character.

Nubia was Wonder Woman's "black sister", created from black clay, just as Diana was created from white clay. Both were brought to life by Aphrodite, but Nubia was stolen by Ares/Mars (the Greek and Roman names were interchangeable, and more often than not, the Roman names were used. Mars was one of the gods whose Roman name was used.), so Nubia did not get the powers that was given to Diana.

Mars raised Nubia to be his warrior, giving her a special ring to keep her mind clouded. Years later, Diana met Nubia, who became her roommate. After several battles, Wonder Woman was able to release Nubia from Mars' control, when she used the heat of the sun, reflected off her bracelets, to cause the ring to expand and fall off. Nubia defied Mars, and optioned to lead her warriors to the ways of peace. It was then that Queen Hippolyta revealed the truth: Nubia was Diana's sister!

Nu'bia is an Amazon warrior who was charged by the Greek Gods with defending the entrance to the river Styx and the Tartarus Gate. Sometime during her time in the underworld, Nu'bia met the Zoroastrian god of light, Ahura Mazda, and became his lover. Nu'bia sided with Wonder Woman.

Nubia becomes queen of Themyscira during Hippolyta's stint with the Justice League. Her exploits as ruler are explored in the Nubia & the Amazons series.

Hailing from the island nation of Amazonia, Nubia functions as Wonder Woman; a diplomat and guardian as well as a representative of her people. Often accompanying Superman and the Justice League, her adventures take her around the world in order to protect justice, liberty and equality.

Renee Montoya ventures forth with Earth-5's Captain Marvel in an attempt to recruit each universe's equivalent of Superman to join Nix Uotan's Army of Heaven on Earth-Zero (the primary DC Earth). The beginning of the issue illustrates their visit to a universe where a black Superman is apparently the President of the United States. This Superman confers with a black Wonder Woman, whom he refers to as Nubia. This Nubia is apparently one of the "Wonder Women of Amazonia", and she uses a relic called the Wonder Horn to summon Renee and the others into her world.

After the events of Flashpoint, Nubia is revealed to be the Wonder Woman of Earth-23 and a member of that Earth's Justice League alongside President Calvin Ellis a.k.a. Superman. 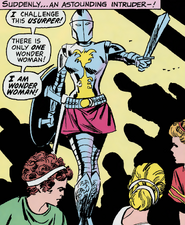 Nubia introduces herself in... 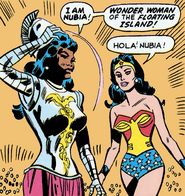 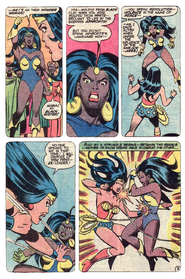 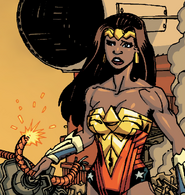 Nubia, the Wonder Woman of Earth-23 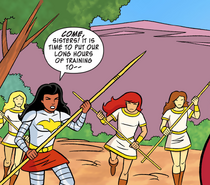 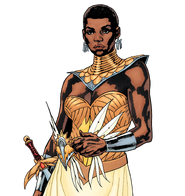 Wonder Woman: Earth One: Volume One 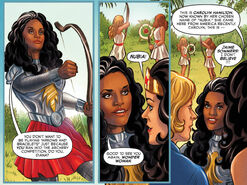 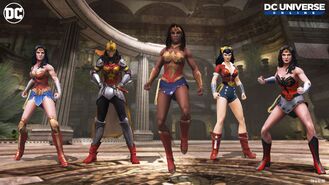 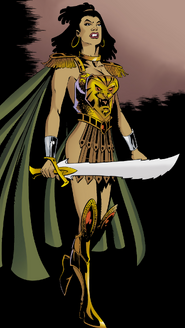 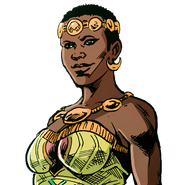