She is legendary monster from Greek Myths. Once decapitated by Perseus as part of his own quest. Through the actions of a jealous Hera, Medusa's two gorgon sisters were set free from their prison on the then hovering Paradise Island. The two then set out to be reunited with their long dead sister. Forcing Circe to recreate the gorgon. Circe at first was unwilling to simply aid the two sisters and followed the letter rather than the spirit of the deal and resurrected only Medusa's head, citing that it had been the part the two sisters had handed her and demanded it be remade. Posidon then promises Circe she would be reunited with her daughter, who was being raised by the Amazons, if she resurrected Medusa. To this Circe agreed, and a vengeful Medusa was reborn.

Medusa harbored the desire to take vengeance on the Champion of the Gods, so her sights was set on Wonder Woman, the ambassador of Themyscira. The gorgon first storms the White House to briefly engage Wonder Woman, who along with Artemis and General Philipus were there to discuss the presence of American warships on Themyscira's horizon, before she escapes as part of a larger plan. Her next strike falls shortly afterwards as she attacks the embassy, turning one of the employees sons to stone in the process. An enraged Diana nearly kills the gorgon in the lobby, but is prevented as Medusa calls out to Ares, challenging Diana in his name. Begrudingly Diana has to accept.

The fight takes place in a baseball court and is by Ares transmitted to the world. The fight is brutal, as Diana fights blind, first by a piece of cloth, then by snake venom she pours into her own eyes. But Diana is victorious in the end as once again, Medusa is decapitated. Ending her plans of turning Wonder Woman and every viewer to stone. Shortly afterwards, Medusa's head is involved in Athena's takeover of Olympus, being used to turn Zeus' champion to stone. Last Medusa was seen was as a stone head in possession of the Morrigan, a trinity of death-goddess'. Her eyes still posse her legendary gaze and two guards fall victim to it as they blunder into it. It is revealed shortly afterwards that Medusa possibly is alive and aware of her situation as the Morrigan mock her, before revealing that Medusa's own tears are capable of reversing the stone gaze if applied in time, if too late, the stone bodies are reduced to slag. 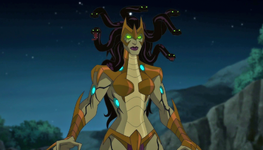