The Lightning Bolt of Zeus is a weapon used by Wonder Woman in combat.

Several feet in length, the bolt emits a massive amount of energy, capable of displacing several military tanks when struck to the ground. (Justice League #1 [2016])

The bolt has other purposes; for example, Diana has used it to revive a "dead" Superman in Justice League of America #9 (2016).

In the Pre-Crisis universe, similar bolts were wielded by Jupiter (the Roman analogue to Zeus) as Jove's Thunderbolts. Using a replenishing resource, Jupiter exploited their power in an attempt to foil Diana's trials to continue as Wonder Woman. (Wonder Woman v1 #131) 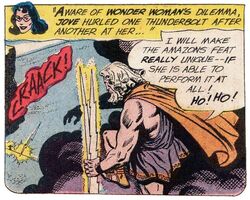 Wonder Woman v1 #131
Add a photo to this gallery
Retrieved from "https://wonder-woman.fandom.com/wiki/Lightning_Bolt_of_Zeus?oldid=26138"
Community content is available under CC-BY-SA unless otherwise noted.