The original, Pre-Crisis lasso was formed from Aphrodite's girdle and forced whomever was bound within it to obey the commands of whomever held the other end. This effect could be used on larger groups of people, although this reduced its efficacy. In addition to being unbreakable, the lasso was also infinitely elastic. Eventually, Diana coated it in special Amazon chemicals that allowed it to transform her civilian clothes into Wonder Woman's garb. Diana demonstrated a remarkable level of skill with the lasso, performing such feats as twirling it to create air currents (upon which she could float) and spinning it to emit certain frequencies that disrupted Felix Faust's spells.

Post-Crisis, the Lasso of Truth is the primary weapon employed by Wonder Woman. The Lasso was forged by the god, Hephaestus from the Golden Girdle of Gaea that was once worn by Antiope, sister of the future Queen Hippolyta. The lasso is completely unbreakable, immutable, and indestructible. The Lasso is approximately 150 feet long. It is able to restore people's lost memories, hypnotize people, get rid of illusions, and people who are in its circumference will be protected from magical attacks. Empowered by the Fires of Hestia, the Lasso forces anyone held by it to tell and understand the absolute truth. Recently, the Lasso has been shown to actually transport Diana's mind into that of whomever is tied within it. Its effects can be very dangerous, as not everyone is capable of facing the truth of their actions stripped bear of excuses. The Amazon Artemis, inexperienced with the use of the lasso, inadvertently drove a man to suicide after tying him in it, and the Lasso reduced both Captain Nazi and Ares, God of War, to tearful surrender by revealing to them the truth of their violent actions.

With Wonder Woman's strength and speed, the lasso can be used as an offensive and defensive weapon.

In the Super Friends animated series, the lasso possessed the ability to follow the telepathic commands of Wonder Woman, physically moving on its own to accomplish tasks. In Super Friends, Wonder Woman was typically displayed using the lasso as a tool for accomplishing feats of strength, leaving it unclear to what extent Wonder Woman herself possessed great strength or the lasso itself performed the feats. In addition, its truth compelling power was used to free Wonder Woman when she was under the mind control of space pirates; Superman found himself snared by the lasso, but he manages to tie the controlled Wonder Woman as well. In that situation, Superman forces her to confess if he is her enemy or friend and the truth of her friendship with him forced from Wonder Woman broke the pirates' power over her.

In the Justice League animated series, the lasso is only used as an exceptionally long, flexible, and unbreakable rope. In Justice League Unlimited however, Wonder Woman's lasso was officially portrayed as being able to compel the truth. This ability was finally unleashed in the episode "The Balance" by Wonder Woman's mother Queen Hippolyta who revealed that Diana had stolen the uniform before being told of its full capabilities. Upon touching the star on the tiara, various parts of the Wonder Woman costume began to temporarily glow such as the tiara, bracelets, belt and lasso. It was after this that Diana discovered that the lasso could compel truth. However, in the series, Diana only used the truth powers of the lasso once, on the demon Abnegazar to learn the location of Felix Faust, an event that occurred in the same episode. 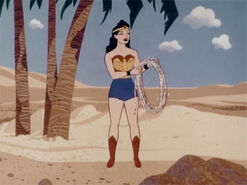 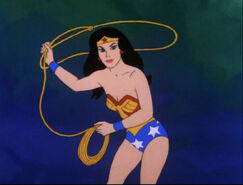 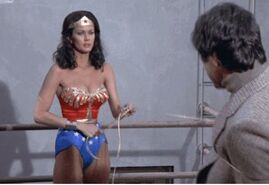 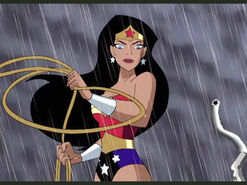 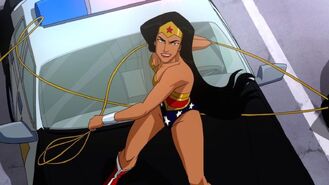 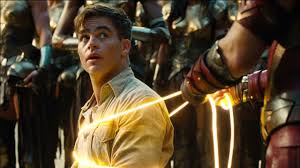