Geoff Johns is a comic book writer and Chief Creative Officer at DC Comics. He's also worked in film beginning as an intern for director Richard Donner, and written for television including Smallville, Arrow, and The Flash.

In a press release from Warner Brothers released in July 2016, Johns was named as one of three writers for the 2017 Wonder Woman movie, but his final credit on the film stands as producer.[1] 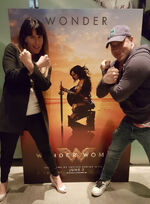 Johns and Wonder Woman director Patty Jenkins pose with a poster for the film.

Retrieved from "https://wonder-woman.fandom.com/wiki/Geoff_Johns?oldid=24204"
Community content is available under CC-BY-SA unless otherwise noted.