Gadot was born and raised in Rosh HaAyin, Israel. In Hebrew, her first name means "wave" and her surname means "riverbanks". She is the daughter of Irit (née Weiss), a teacher, and Michael Gadot, an engineer. Her parents were bothborn in Israel, and they had Hebraized their surname from "Greenstein" to "Gadot". Her maternal grandparents wereHolocaust survivors. Her ancestry is Polish-Jewish, Austrian-Jewish, German-Jewish, and Czech-Jewish. Her high school major was biology. She says that in high school she was successful at basketball due to her height. As an adult, she started studying law twice at the Reichman.

From the age of 20, Gadot served for two years as an enlisted soldier of the Israel Defense Forces. There, she excelled in a grueling three-month boot camp that prepared her to serve as a combat trainer. She says of her time in the army: "You give two or three years, and it's not about you. You give your freedom away for a while. You learn discipline and respect. The things I've been through as a soldier prepared me to deal with career things as well".

At the age of 18, Gadot won the 2004 Miss Israel competition, and next competed in the 2004 Miss Universe pageant in Ecuador. Following her participation in the competitions, she joined the Israeli Army where, as a citizen of Israel, she completed her two years of mandatory military service.

After leaving the army, Gadot studied law. It was when she had completed her first year of school that a casting director called her to audition for the part of Bond girlCamille Montes in the film Quantum of Solace. Although she lost the part to Olga Kurylenko, the same casting director hired Gadot for the role of Gisele in Fast & Furious. Gadot said, "I think the main reason was that [the director] Justin Lin really liked that I was in the military, and he wanted to use my knowledge of weapons." Gadot performed her own stunts in the Fast & Furious films.

In 2007, the 21 year old Gadot took a part in the Maxim photo shoot "Women of the Israeli Army", and as such she featured on the cover of the New York Post. In April 2012, Shalom Life ranked her Number 5 on its list of "the 50 most talented, intelligent, funny, and gorgeous Jewish women in the world", behind model Bar Refaeli and actress Eva Green. In 2014, Gadot was one of two Israeli actresses, along with Odeya Rush, listed as an upcoming leading lady by InStyle magazine.

"I was going through stuff in my study and found these...CRAZY story about these photos from 6 years ago (maybe 7) ... There was an article about me and at some point I mentioned my passion for Wonder Woman .. the magazine came up with this photography concept, turning ME into Wonder Woman. Little did I know, a few years later I would land my dream role..."[1]

"I remember that When I was searching for an inspiration for the shot I got a vision of Gal as a super hero flying in between Tel Aviv and Hollywood, following her bliss to become the great actress that she is. I was happy to see now in the news that last night was the premiere of Wonder Woman 2016."[2] 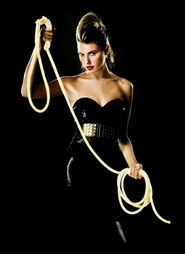 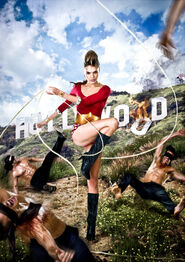 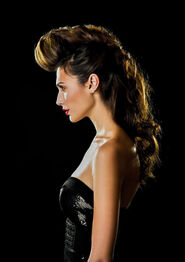 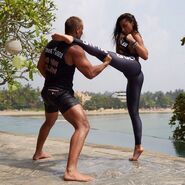