In her 1940s incarnation, Etta Candy is a spirited, rotund young woman who leads the Beta Lambda sorority at Holliday College and aids Wonder Woman in her adventures. She is known for her moxie, her love for candy, and for her trademark call "Woo! Woo!" Other familiar characteristics included her junky car nicknamed Esmerelda, and a variety of sassy interjections, such as: "For the love of chocolate!" Her father, Hard Candy, lived with her mother, Sugar Candy, on a ranch that provided the setting for cowboy-themed adventures. Holliday College was the setting for science-driven stories.

When Robert Kanigher became writer and editor of the adventures of Wonder Woman, the familiar characters of the Marston era — Etta, the Holliday College girls, Darnell, and most of the villains — were phased out during the Silver Age.

In the Golden Age adventures, Etta was a young, college-age sidekick who aided military intelligence in times of crisis; in the television series, with its more streamlined cast, Etta was integrated in the workplace setting as a secretary to Gen. Blankenship.

Etta Candy was revived in the early 1980s, when Steve Trevor and General Phil Darnell were also revived. Etta was featured as secretary to Darnell, and Diana's roommate. Unlike the Marston characterization of a bold, sassy, wisecracking sorority leader, Etta was now presented as meek and insecure. She was weight-conscious, and shared an apartment with Diana Prince, unaware of her secret identity. Her love interest was nerdy, hopelessly clumsy Howard Huckaby.

In the years leading up to Crisis on Infinite Earths (1986), writers Dan Mishkin and Mindy Newell took Etta in a different direction. She displayed more confidence, and even became Wonder Woman for one evening, battling Cheetah, Angle Man, Captain Wonder and Silver Swan.

Following the 1987 revamp of Wonder Woman, Etta has been romantically linked with, and eventually married to, Steve Trevor, who is no longer Diana's love interest.

A career Air Force officer, Etta serves as Steve Trevor's aide when he is framed for treason as part of Ares' scheme to spark a global war. Etta is fiercely dedicated to her friends, and her faith in Steve's innocence helps him clear his name, even though the two temporarily become fugitives while helping Wonder Woman overthrow Ares' plans. While on the run, Steve and Etta realize their love for one another. A happy couple, they remain friends with Wonder Woman.

Feeling insecure about her weight, Etta developed an eating disorder that was kept secret from her friends. She was able to lose a lot of weight, but at the expense of her health. When she finally collapsed due to a lack of food in front of her friends, Diana advised her to take better care of herself and maintain a sensible diet. Since that time Etta has gained her original weight back.

Etta and Steve largely disappeared from the pages of Wonder Woman during the run of writer/artist John Byrne, and they have appeared infrequently since then.

Writer Grant Morrison used an aged version of Etta as a counselor in the first issue of Seven Soldiers: Zatanna.

In Wonder Woman #14, Gail Simone reintroduces Etta Candy as an intelligence officer requested by Sarge Steel to report on Diana Prince and her associations. 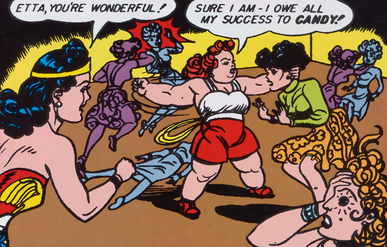 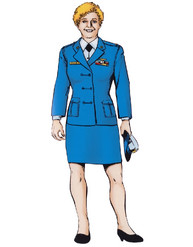 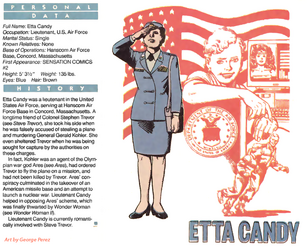 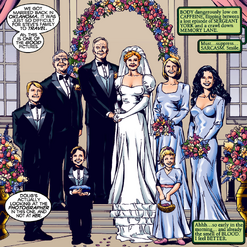 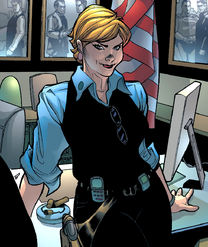 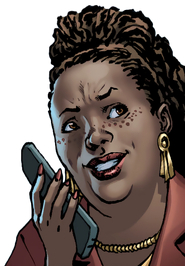 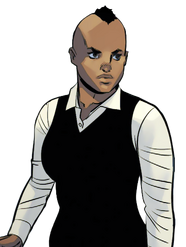 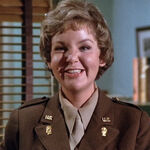 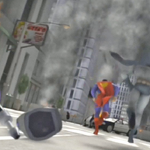 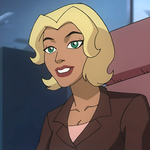 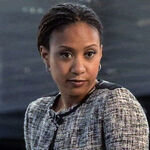 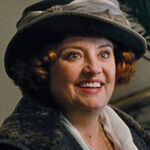 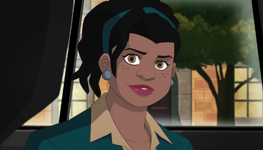