Donna Troy is a DC Comics character created in 1965 who has gone as Wonder Girl, Darkstar, Troia, and has stood in as Wonder Woman on occasion.

Donna was originally created to be a playmate for a young Diana by the sorceress Magala.

She was abducted by Dark Angel (who mistook her for the real Diana) and cursed to relive countless tragic lives. But it would not be until the intervention of Wonder Woman, Hippolyta, and the Flash years later that she would learn this.

Donna remembers being orphaned in a fire and being saved by the goddess Rhea. The mythological Titans on New Chronus raised her as one of twelve Titan Seeds, orphans from various planets who would have died if Rhea had not saved them. Each one was given the name of a place that worshiped the Titans, and Donna was given the last name of Troy in homage to the ancient city.

Donna was one of the founding members of the Teen Titans.

She married Terry Long, a college professor, and soon became pregnant. A Teen Titans group from the future soon confronted her, claiming that her son would threaten the future as Lord Chaos. Donna voluntarily gave up her powers to prevent this.

She later requested for her powers to be returned but was denied. She then joined the Darkstars and rejoined the Teen Titans as a Darkstar.

Terry later divorced Donna citing that her superhero role put the family in danger and gained sole custody of their son. She turned to teammate Kyle Rayner for comfort, but left him after Terry, Robert and Jennifer (Terry's daughter from his first marriage) were killed in a tragic accident.

An android named Indigo appeared, badly damaged and in need of repair. In her attempts to repair herself and call for aid from other androids, she caused a Superbot to go rogue during a meeting of the Teen Titans and Young Justice; Donna and Omen were killed during the attempts to stop it.

Donna was resurrected as the Goddess of the Moon. The truth about her past and New Cronus was explained by the Titan of the sun, Hyperion. Donna has been revealed to be a counterpart of Harbinger and the Dark Angel.

Dark Angel was the Earth-7 counterpart of Donna attempting to assimilate them all as a side effect of the Crisis on Infinite Earths.

The Titans of Myth then imprisoned themselves.

Donna gained all knowledge of her alternate selves and was entrusted with the Universe Orb by Harbinger.

Donna led a group of heroes to New Chronus to deal with a rip in space caused by Alexander Luthor. They also attacked Luthor through the rift. Disastrous events happened to the team, including the death of Jade and several other members who went missing. Donna also procured a 'red sun eater' in order to Superboy-Prime. Following the events of the Crisis, Donna returned to New Cronus where she analyzed the history of the universe as it had been recorded in Harbinger's old Universe Orb.

One Year Later, Donna Troy has assumed the mantle of Wonder Woman. Diana stepped down following the Crisis, feeling the need to 'find out who Diana is'. Although Diana's pre-Crisis on Infinite Earths Silver Age career has been brought back into continuity after Infinite Crisis, Donna's post-Infinite Crisis origin seems to be essentially the same as her post-Crisis on Infinite Earths one. Wonder Woman #1 opens with Donna stating: "I was born of magic," and the character is shown standing at a distance beside the Amazon Magala at the time of Diana's departure from Themyscira. Donna is referred to as Diana's biological sister throughout (Donna's original Silver Age backstory depicted her as having been brought to Themyscira later in her life, and not being related to Diana.) In a flashback, Donna wears her star-spangled Titan garments (which she also wears in the History of the DC Universe portions of 52 #2 - #11). In the present timeline of Wonder Woman #1, the only sign of her Titan regalia is a bracelet that forms part of her Wonder Woman armor.

In the midst of a fight with Cheetah and Giganta, Donna is overwhelmed when Doctor Psycho manipulates her into believing that Diana is attacking her with deadly force. At the same time, Diana, posing as a government agent, arrives on the scene. Subsequent issues have shown Diana's attempts to rescue Donna, with the revelation that Circe is behind the attacks and capture.

Donna works alongside ex-boyfriend Kyle Rayner, who has taken up the powers and title of Ion again. They go up against one of the Monitors who attempts to remove them from the newly rebuilt timestream, claiming the two are unwanted anomalies. Donna returns to earth with Ion in time for him to say good-bye to his dying mother.

After that event, Donna joins several former Teen Titans in the current team's battle against Deathstroke and his Titans East team.

Donna soon after attended Duela Dent's funeral with the Teen Titans. After Duela's burial, she was confronted by Jason Todd, who sought her out as a kindred spirit. She repeatedly ran into the helpful Jason while trying to investigate Duela's murder. Her investigation was put on hold once she discovered the Amazons had invaded Washington, D.C. as part of the events of Amazons Attack. She travels to the city and confronts the recently revived Hippolyta to put a stop to the invasion. Once Hippolyta informed her that she would consider a withdrawal only if Donna could include Diana in the peace talks, Donna left to find her sister only to discover that Jason Todd had followed her to Washington as well. Jason told Donna that he believed the Monitors were responsible for Duela's death but before anything else could be done, both warriors were attacked by the Monitor's aide, Forerunner. They were consequently saved by the seemingly benevolent "Bob" the Monitor, and recruited to help locate Ray Palmer. Their journey took them across the great of the expanse of the new Multiverse whereupon they were also joined by Donna’s former boyfriend Kyle Rayner (now a Green Lantern once again) as well as Ray Palmer’s successor Ryan Choi. This loose confederation of adventurers became known as the Challengers from Beyond. After several haphazard missions in the Nanoverse, they eventually found Palmer in the parallel reality known as Earth-51. Shortly thereafter, their colleague Bob the Monitor betrayed them and Earth-51 was soon destroyed as a result of the Morticoccus virus. With Palmer in tow, the Challengers eventually returned to their home dimension. Donna, Ray and Kyle agreed that with the growing individuality of the fifty-two existing Monitors, there was too much room for corruption. They all agreed to serve as a watchdog group in order to "Monitor the Monitors".

Return of The Titans

Returning to Earth, Donna reunited with her old teammates the Titans. The group reformed after discovering that the children of one of their deadliest foes, Trigon, had been systematically hunting down members of the Titans both old and new. 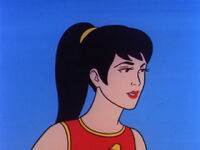 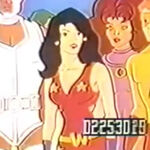 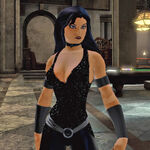 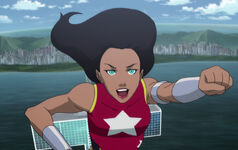 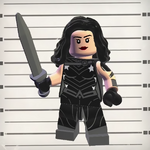 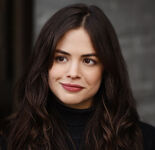 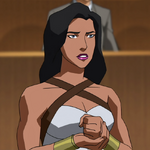 Grey Griffin
Young Justice
2019
Add a photo to this gallery

Retrieved from "https://wonder-woman.fandom.com/wiki/Donna_Troy?oldid=26611"
Community content is available under CC-BY-SA unless otherwise noted.