DC Super Hero Girls is a franchise centered primarily on female DC Comics characters, most of whom are portrayed in more youthful incarnations than they're usually portrayed. Developed in 2015 and 2019 as two distinct versions, the property consists of animation, books, comics, toys, and other media. 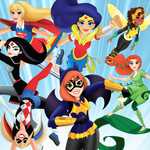 The first incarnation consisted of a series of short-form web videos and direct-to-home-video titles produced in a simple animation style with moderate pacing geared toward a young audience. Primarily set at Super Hero High School, the cast consisted of superheroes and villains facing the challenges of growing up with unique abilities. 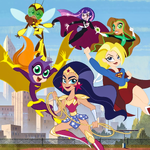 The rebooted DC Super Hero Girls was developed as a TV series for Cartoon Network that premiered on March 8, 2019. Led by Lauren Faust with new character designs, the animation and tone shifted to a stylized approach conducive to a broader audience. In this version, a core group of reluctant heroes band together under the guidance of Wonder Woman.