A follow-up to 2013's Man of Steel, Batman v Superman: Dawn of Justice deals with the fallout of the destruction of Metropolis, and a plot by Lex Luthor to get Batman and Superman to eliminate one another.

Diana Prince, an antiquities dealer, works to track down a photo of herself during World War I with Steve Trevor and a group of soldiers. After crossing paths with Bruce Wayne, Diana comes into possession of a series of files obtained on meta-humans — herself among them.

As she prepares to board a plane away from Metropolis and Gotham City, Diana catches news footage of Doomsday causing havoc in the city. Abandoning her flight, she appears alongside Batman and Superman in a battle to defeat the monser created by Lex Luthor. 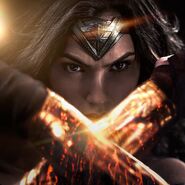 As promotion for the release of the film, DC Comics commissioned a series of variant covers for its comic book titles, several of which featured Wonder Woman. 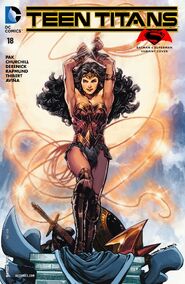 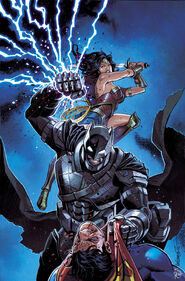 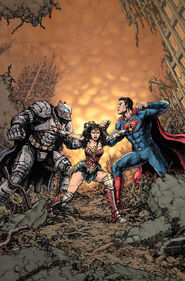 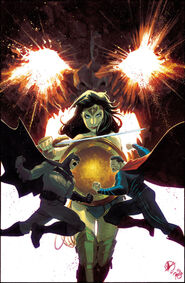 Justice League #49
Matteo Scalera
Add a photo to this gallery
Retrieved from "https://wonder-woman.fandom.com/wiki/Batman_v_Superman:_Dawn_of_Justice?oldid=27361"
Community content is available under CC-BY-SA unless otherwise noted.