Ares is based on the Greek god of the same name. He is most often depicted as an antagonist of Wonder Woman. His first appearance was in Wonder Woman #1. His modern incarnation was first created in the DC Universe by George Pérez though, as Mars (his Roman name), he had plagued Wonder Woman for decades.

During most of the Golden Age, Silver Age, and Bronze Age, Ares was called Mars and was one of the most recurrent enemies of Wonder Woman. He was depicted as a Greco-Roman warrior in orange armor. Unlike the contemporary version of the character, his face was visible.

Ares, who eventually became known as Mars, sought to realize his vision of eternal war and conflict in the world of man. He was chiefly opposed by Aphrodite, goddess of love, who sought to realize a contrary vision of loving civilization. When Ares taunted Aphrodite with the success of his plans, Aphrodite molded from clay and breathed life into a new race of women, the Amazons, who built a city-state called Amazonia in which they created a women-centered civilization for spreading the gospel of Aphrodite's Way. Hippolyte was granted a golden girdle which made her invincible. (Wonder Woman (vol. 1) #1)

Enraged at the success of the Amazon nation, Ares, now known chiefly as Mars, called upon Hercules to steal the golden girdle and enslave the Amazons. Aphrodite answered the prayers of the contrite Amazons and allowed them to break free, then sent them to a new hidden home they would call Paradise Island.

During a period when the Amazons of Earth-One sent a champion, named Artemis, into Man's World as a champion for justice and peace, Mars manipulated circumstances so that Artemis would slowly drift from a path of trust and love, ultimately setting her up to appear to have betrayed the hidden location of the Amazons' interim hidden home called Themiscyra.

Mars eventually created a home base on the planet of Mars, with its superpowerful population enslaved to serve him and his chief deputies, the Duke of Deception, Lord Conquest, and the Earl of Greed. He used Mars as an interplanetary headquarters, supplementing the enslaved Martian population with the spirits of the dead he collected from war zones on multiple planets, including Saturn and Earth. Slave spirits became embodied after being ferried to the planet Mars, where they were subjected to strength tests to determine how they would best be used, whether as gladiators in slave games, personal slaves in the retinue of Mars himself, or employees in the War Factories, one of which included the Lie Factory run by the Duke of Deception. The very strongest would be trained and given new bodies to be sent to wage future wars on earth. He also set up the Injustice Court for humiliating slaves and meting out punishments. (Wonder Woman (vol. 1) #2)

From this base, he sought to defeat the Allied cause in World War II, but he found himself repeatedly thwarted by the Amazon champion Wonder Woman.

Mars repeatedly tangled with Wonder Woman on Earth-One and Earth-Two. During a period when Diana abandoned her powers to live among the world of men as the Amazons retreated temporarily to another dimension, Mars (calling himself Ares this time) and his children Phobos, Deimos, and Eris battled the Amazons to secure from Hippolyta the secret to domination of all dimensions of existence. Later, he enlisted his descendant Helena Alexandros to become the Silver Swan.

His final scheme before the history-changing battle of the Crisis on Infinite Earths was to ally himself with Hades and the Anti-Monitor to subdue the Gods of Olympus. As Wonder Woman engaged him in final battle, Steve Trevor freed the gods and Hades' wife Kore appealed to her husband with a message of love, leaving Mars isolated.

Despite being Zeus' son, Ares never fit in with the other gods of Olympus and created his own realm, the Areopagus. Aphrodite, the patron of the Amazons, swore that her women would save the world with love from the hatred and warfare of Ares. Recently, through his deceit and manipulations, Ares deposed Hades and became ruler of the underworld.

Ares did his best to destroy the Amazons, using Hercules against them, but Diana was born and raised just in time to fight Ares as Steve Trevor's plane, driven by one of Ares's human puppets, crashed into Paradise Island. His plot was to fire the missiles between the United States and Russia at the same time, provoking World War III, but Diana managed to make him see, trapped in her magic lasso, how this chaos would lead to his own disappearing, with Ares having no one to worship him.

Although Ares abandoned his plans that time, he managed to possess an unimportant criminal, Ari Buchanan. Possessing his body, he changed his name to Ares Buchanan. He began climbing the business ladder by providing hi-tech weapons for gang wars. As Buchanan, he had a relationship with his lawyer Donna Milton (who was Circe in disguise, although not even she knew it then), conceiving a daughter named Lyta. Lyta has been shown to possess a great amount of magic, which she is still practicing using. However, Ares didn't care much about Donna, shooting her while she was pregnant. Circe, as Donna, later tried to help Diana out of a trap he laid. She used the last of her forces to shoot a gun, which produced a sort of mini-black hole and absorbed Ares into it. She, Diana, and the child survived.

As opposed to ancient times, the role of various gods were shown to have altered somewhat according to modern practices and beliefs. Because of this, the actual faith-based power Ares' father Zeus received proved to be very much diminished. On the other hand, other gods such as Athena, Aphrodite, and Ares began to gain more power due to the appearance of the computer age, love never diminishing, and conflict remaining consistent. Thus the three godly siblings eventually took over Olympus as the godly home's new masters.

Realizing that conflict proved to maintain his strength over the output of war, Ares changed his title to the God of Conflict. To celebrate this change he altered his appearance to a more approachable visage. His rule under this name proved to be short-lived though as the god Hades was also overthrown and Ares was all too eager to take up the mantle of God of the Dead.

Realizing that a crossroads for the gods of Olympus was at hand, Ares confided in his half sister Cassie Sandsmark about a future war. In exchange for additional powers, the only wish he requested in return from his sister was her love. He then traveled to Themyscira and kidnapped his daughter Lyta who was under the protection of the Amazons. Discovering this fact, Circe confronted Ares and was surprised to learn of his new godly title. She agreed to remain as his consort and to raise their daughter Lyta in the Underworld.

During Ares' family bonding with Cassie, he blessed her with a powerful lasso able to expel Zeus's lightning in times of anger for her to use in her persona as Wonder Girl. Ares has since appeared to Cassie repeatedly in order to warn her about "the coming war." In Teen Titans (v3) #17–19, the Teen Titans were thrown ten years into the future, where Cassie had inherited the mantle of Wonder Woman after Diana's death. She was also referred to as "Ares' champion."

Ares appeared to Cassie for apparently the final time in Teen Titans #33, where he revealed that the gods were leaving this plane and Zeus was taking the power he had granted Cassie as well. In exchange for acknowledging their siblinghood and becoming his champion, he offered her some of his power, saying only that she would be "more powerful than [she's] ever been." The full extent of Cassie's powers has not been revealed, though Infinite Crisis #6 and Teen Titans #34 indicate that she has retained all of her former powers.

During the events of Amazons Attack! it is discovered that Ares left Circe and kidnapped their daughter to raise on his own. As he and Lyta were only spoken of during the storyline, their presence is yet unknown.

As god of War, Ares himself became consumed by his own domain, having fallen to violence and bloodlust he was considered a threat by his fellow Gods and so they conspired to trap him. His consort, Aphrodite, manged to trick and bind Ares with chains forged by Hephaestus which not just held him but also helped to calm his rage. Ares was then confined to a prison beneath the island of Themyscira which was then populated by the Amazons which were created to guard the imprisoned god of war.

Over the course of his imprisonment, Ares' twin sons Phobos and Deimos, schemed to free their father from Themyscira, either so that he could lead them in battle or so that they could kill Ares and usurp him as god of war. As part of their plan, the twins stole the soul of Izzy Cale to coerce her influential mother into aiding their cause, and trapped her in a soul stone. Sensing the young girl's torment within the stone, Ares whisked Izzy's soul away from his sons and into his own prison where she could at least be made comfortable and safe, albeit still imprisoned. Phobos and Deimos finally made their way to Themyscira ten years later, alongside Wonder Woman and Izzy's mother, Veronica, who brought her daughters body which was re-joined with her soul, allowing the girl to leave Ares' dungeon and live among the Amazons of Themyscira. Meanwhile Phobos and Deimos were defeated and bound by Wonder Woman although they where not imprisoned with Ares.

Years later, Ares would be joined in his imprisonment by the half Amazon Grail after she planned to kill Zeus with her father, Darkseid. By this time Ares had decided that he could achieve virtue and atone for his past crimes by only embracing wars that were 'just'. To enact this plan he gave Grail the sword known as Godkiller and persuaded her to kill him with it. The war god's death triggered a rift across Themyscira, Olympus and the mortal world. The interplanar chaos would banish Aphrodite and other mythical creatures to Earth, allow Grail to usurp Hippolyta as ruler of Themyscira and cause Ares to be freed from his prison and remerge on Earth.

Now free, Ares tried to embrace the ideal of a 'just war' by supporting rebels in a violent civil war who believed they were oppressed by their rulers although the conflict would be complicated by the arival of Wonder Woman and her allies Etta Candy and Steve Trevor. Despite trying to support the 'right' side of the war, Ares soon realised his actions still caused the death of innocents that he was now trying to protect and was dissuaded from further battle by Aphrodite who had been discovered by Steve Trevor. Ares remained unaccounted for a period of time until he attempted to capture and interrogate Wonder Woman, in the guise of an A.R.G.U.S. agent, only to have the tables turned on him by Wonder Woman who had lured him into a cell which was later transported by the Amazons back to his old prison of Themyscira.

As do all the Olympian gods, Ares possesses tremendous strength, though he is now perhaps the physically strongest of them. Moreover, he is a master of conflict and strategy, and has complete command over any weapon. His armor is virtually indestructible. He can regenerate his physical being into any form he wishes and can teleport himself and others, as well as alter reality to whatever he desires. He is now also recognized as the Death god of the Greek Pantheon and thus has control over the dead.

Being a god, he is also immortal. 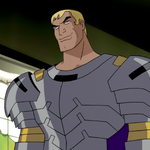 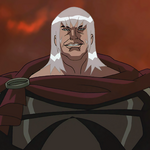 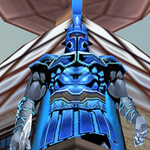 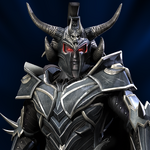 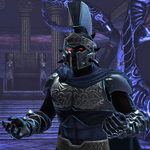 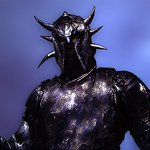 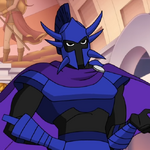 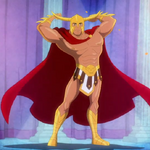 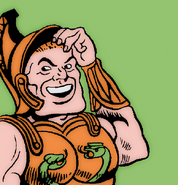 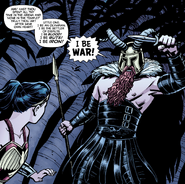