Antiope is an Amazon who led a splinter group who became the Amazons of Bana-Mighdall.

Antiope was created when the Greek goddesses wanted to spread the message of peace and love, and they thought that creating a race of strong women would help fulfill their requirements. They took the souls of women who had died at the hands of men, and sent them to the bottom of the Aegean Sea. There on the bottom of the seabed, clay was formed into the shape of a human body and once they reached the surface, they became living human beings. The first one was Hippolyta and the second one was Antiope. Each of these women were granted traits from each of the goddesses. Hunting skills from Artemis, wisdom from Athena warm personalities and an ability to create warm homes from Hestia, lots of harvest from Demeter and beauty of not just physical appearance, but soul as well from Aphrodite As a sign of their leadership, the goddesses gave Hippolyta and Antiope each a Golden Girdle of Gaea which would enhance their abilities. They then founded the city Themyscira and lived there in peace for many years.

During their reign, Antiope and Hippolyta came across a mother and a daughter. The mother was Queen Hypsipyle and her daughter was Princess Phthia. They too also ruled a matriarchal and that Argonaut Jason landed on their island and had a son and daughter to the queen, the daughter being Phthia. Jason had left the island to explore and the Queen was left to rule by herself. There, the Queen's subjects rebelled against her, killed her infant son and was cursed with leprosy. They banished the Queen and Phthia and eventually met Calchas who told her that she should return to her island, escorted by a warrior queen, as there is a lesson that could be learned. Antiope and a group of Amazons agreed to escort her. When the Queen returned home to her island, Lemnos, they had discovered that the women there had been dead for a long time now by internal fighting and civil wars. Queen Hypsipyle died of grief and Antiope adopted Phthia as her own daughter and both shared a very special bond.

The god Ares, one of the Amazons' greatest enemies, sent Hercules to invade the Amazons and steal their Golden Girdles. Heracles met Hippolyta in the woods outside Themyscira, but Heracles attacked Hippolyta and she easily defeated him with her strength and cleverness. Hippolyta still wished for peace, and invited him and his army into Themyscira to get to know each other better. Hiding his anger, he accepted. During the feast, Hercules and his men drugged their wine and took them prisoner. He then stole their Golden Girdles, and the Amazons' city was sacked, the Amazons murdered, raped or enslaved as the men saw fit. Hippolyta prayed to Athena for aid. Athena would help, but only if they would not seek revenge on Hercules. Hippolyta agreed and the bonds were broken. The Amazons were free now, and they were filled with anger and wanted to take revenge on Hercules and his men. They broke Hippolyta's oath with Athena and so she forced them to serve a penance. Hippolyta agreed, though Antiope, enraged by Athena's demand, gave her sister the remaining Golden Girdle and renounced the gods. She said her goodbye to Hippolyta and she left with another group of Amazons who wished to seek vengeance against Heracles.

Antiope and her Amazons arrived in Greece, and there she met Theseus who had fallen in love with Antiope. The two were and together they joined their armes. The Amazons did not like the idea of joining with the men who had raped them and murdered their sisters. Phthia was also against this as this resembled the cursed life of her mother, though she still accepted their marriage. Soon they had a child called Hippolytus and they had found a male heir to the throne. Theseus' former wife, Ariadne, abandoned on an island and blinded by Theseus' hand, sought revenge with the aid of Circe. Circe transported Ariadne to Antiope's room and, with a magic dagger forged with the fires of Ariadne's hate, the Amazon Queen was murdered. Worse, Phthia was framed. The news of Antiope's death and the false accusation of her daughter enraged the Amazons and they had freed Phthia from Theseus' dungeon and had also taken back Hippolyta's Golden Girdle that Heracles stole. With that, Phthia carried on Antiope's rule and carried on the Banas. 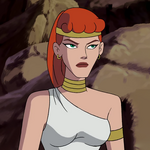 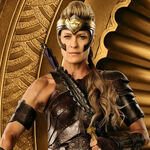 Robin Wright
Wonder Woman
Add a photo to this gallery
Retrieved from "https://wonder-woman.fandom.com/wiki/Antiope?oldid=23932"
Community content is available under CC-BY-SA unless otherwise noted.